Speech of the Secretary of State of the Republic of Kazakhstan Gulshara Abdykalikova, World Assembly for Women

For the last years Kazakhstan made significant progress in addressing gender issues.

First of all, we established necessary legislative basis which ensures gender equality.

Comprehensive Strategy for Gender Equality was approved by the Decree of the President Nursultan Nazarbayev. Two gender oriented laws “On State Guarantees of Equal Rights and Equal Opportunities for Men and Women” and “On Prevention of Domestic Violence” were approved.

Secondly, we formed institutional framework. National Commission for Women, Family and Demographic Policy under the President of Kazakhstan provides efficient interaction between the state and public institutions.

Thirdly, a network of specialized nongovernmental organizations is being developed dynamically. Today about 300 NGOs actively engaged in protecting women’s rights and interests.

Today Kazakhstan has a National Network of Schools for Women's leadership, Clubs of Women in Policy, Resource Centers for protection of women’s and children’s interests in all regions.

Let me emphasize on the political will of the President of Kazakhstan Nursultan Nazarbayev. He underlines a special mission of women in the development of the society. In the Strategy “Kazakhstan – 2050” President Nazarbayev calls “to actively involve women in the state and public governance... to create favorable conditions for opening and doing business by women”.

With the strong support of the government today women of Kazakhstan became a driving force of the economy.

In 2014 Kazakhstan took 25th place in Global Competitiveness Index in “Working women, the Proportion in Relation to Men” indicator, and 43rd place in the Global Ranking of Gender Equality of the World Economic Forum, and entered the group of countries with high evaluation of women's opportunities in economic, political and other spheres.

Kazakhstan actively promotes gender issues in its foreign policy. The issues of promoting gender balance and women's participation in governance were included into the agenda of Kazakhstan's Chairmanship in the Organization on Security and Cooperation in Europe in 2010 and Organization of Islamic Cooperation in 2011. The Post of the Special Representative on Gender Issues was established during Kazakhstan's Chairmanship in the OSCE.

Starting 2012 the issues of enhancement of women’s economic potential have been discussed at the multiple venues of the Astana Economic Forum which annually is being held in the capital of Kazakhstan.

Dear participants of the conference!

Let me express my gratitude to the Prime Minister of Japan Mr.Abe for the invitation to participate at this conference.

I would like to stress that we have the same goals with Prime-minister’s initiative to create “a society where women prosper” and in particular, in developing the womenomics. Therefore we need to combine our efforts to empower women to improve the quality of their life globally.

In this regard we suggest the following:

First, to discuss the economic promotion of women at a special panel session of Astana International Economic Forum. It becomes important in the context of the increasing role of women in the global economy.

Second, to create a network of women's organizations at the international level with the involvement of women organizations’ leaders. It should concentrate on deepening international cooperation in the field of protection of rights and interests of women for secure and harmonious world.

Third, as I already said, the capital of Kazakhstan Astana will host International specialized exhibition EXPO-2017. The EXPO theme “Future Energy” is targeted on promoting the concept of renewable energy. It addresses two major problems of humanity: access to clean energy and stabilization of the global climate. It is a new chance for human beings to consolidate efforts for scientific, technical and industrial collaboration, involvement of global society in this process.

We invite everyone who cares about our common future to the young capital of Kazakhstan – Astana – to visit EXPO – 2017.

would like to propose to hold a special conference of Women in the Fields of Energy and Development of “Green business” in the framework of the next Forum in Tokyo. I think it will contribute to a more detailed discussion by experts of the EXPO-2017 theme dedicated to future energy.

Kazakhstan reaffirms its commitment to further development of gender equality and empowerment of women in all spheres of life, at all levels and in all continents.

Thank you for your attention!

Phone conversation with President of the European Council Charles Michel 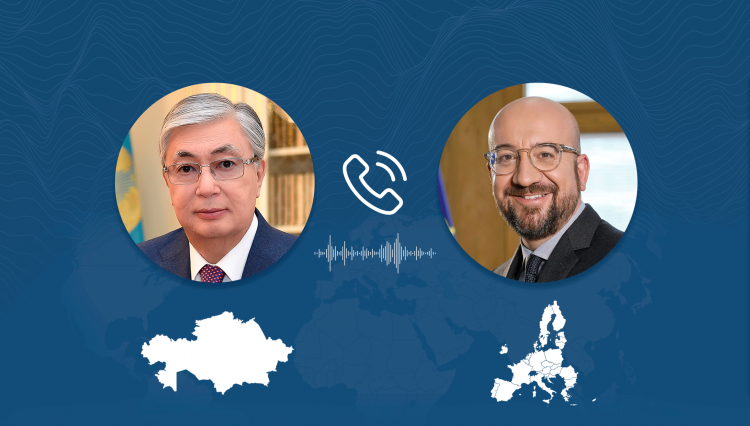