Kassym-Jomart Tokayev took part in the extraordinary XX Congress of the Nur Otan party, which was chaired by First President – Elbasy Nursultan Nazarbayev.

Speaking to the Congress participants, Kazakhstan President noted that nowadays the Nur Otan party has become the main political force in the country.

President Tokayev said that despite the current difficult situation, Kazakhstan will consistently continue to implement its strategic development goals. One of the main tasks is to ensure the continuity of the Elbasy policy. He recalled that in his State Address to the Nation, he highly appreciated the leading role of the Nur Otan party in society.

According to Kassym-Jomart Tokayev, the world is entering an era of global change, while the system of international relations is increasingly plunged into a state of uncertainty and even chaos. As stated in his speech, the deepest recession in the last century has set the world economy back a decade, and it will take enormous effort and time to restore the previous growth rates and balanced development.

“Kazakhstan has a sufficient margin of safety, first of all, because we have a well-elaborated development plan, which is supported by financial resources. Thanks to the support of millions of responsible citizens, we were able to maintain internal political stability, support the business community and ensure that all social obligations of the state are fulfilled. Traditional values of our people – mutual assistance, steadfastness, and empathy have played a crucial role here,” the Head of State is convinced.

The President noted the contribution of the people to the fight against the coronavirus pandemic, during which the country’s citizens showed genuine solidarity and mass dedication. According to him, the motto “We are together” (Biz birgemiz) has become a formula of Kazakhstan’s patriotism.

As far as Kassym-Jomart Tokayev is concerned, in times of crisis, there is unique opportunities open up for the ruling party, the Government, and the entire society.

“In order to use this historic opportunity, we need to offer the country a new development paradigm. This will require the efforts of all branches of government: the President, the Government, and, of course, the legislative branch. Therefore, the upcoming elections are of a great importance for the entire society,” he said.

The Head of State also called for giving a new impetus to the system modernization formulated by the Elbasy in the Five Institutional Reforms and the Plan of the Nation.

“To this end, we are adopting the election program “Path of Change: A Decent Life for Everyone!” until 2025. This is a detailed and realistic document. Despite the difficulties in the economy, Nur Otan together with the Government plans to mobilize 21 trillion tenge for the implementation of the Program over the next five-year. The program offers an effective set of concrete measures aimed at the social progress of the country and improving the welfare of the people. The Party took into account the suggestions and instructions received from the public. It is no exaggeration to say that our Program was prepared by the entire country,” the President stressed.

As the first important task, he highlighted the provision of equal opportunities for every citizen to realize their potential.

The President said that over the next five years, more than 3 trillion tenge will be allocated for the annual indexation of social payments. The size of the solidarity pension will also be indexed annually, and the amount of increase should be two percent higher than the inflation rate.

The second priority in the Party’s program, the Head of State called the formation of a healthy intellectual nation. In order to move in this direction, given new global challenges, spending on education, science, health, culture and sports will be increased.

“This is a strategic investment in human capital and into the future of our country. The amount of healthcare funding will be at least 5% of GDP. We need to be prepared for possible new epidemics,” Kassym-Jomart Tokayev said.

The third priority in the speech was about the sustainable development of the economy and regions. The President stated that the world economy is plunging into a long depression. Nevertheless, he believes that the crisis is an opportunity to carry out systemic reforms to build a new economic model.

“The entire world economic science and clear-headed politicians come to the conclusion that in the conditions of the global crisis, which in fact has no precedent in the mankind’s history, the role of the state in managing economic processes is objectively increasing,” the Head of State said.

At the same time, Kassym-Jomart Tokayev pointed out the importance of ensuring economic growth mainly through a strict but balanced macroeconomic policy, support for the private sector, and fulfillment of social obligations to citizens, which in turn implies strict control over expenditures.

The fourth priority in the Nur Otan program is an accountable, “the listening” state” and responsible citizens.

According to the President, progressive and stable development is impossible without interaction between the state and society based on the principles of mutual trust and responsibility.

In this regard, President Tokayev once again stressed that the main reference point in our work is the aspirations and problems of people. The state, according to him, is obliged to hear the voice and opinion of the people.

“The efficiency of the Party’s work will depend on practical solutions that improve the lives of our citizens. Not empty words and promises, but real deeds are the best argument in the struggle for people’s trust and political leadership. Therefore, the Party will work closely to modernize the system of state administration. This is a strategic task,” the President said.

In his speech, it was noted that the Party’s new program is focused on building a developed civil society and an economically self-sufficient state. Kassym-Jomart Tokayev reminded that the status of the ruling party is not in access to power, but in the ability to bring real benefits to the country and people.

“Party members, especially those who hold high positions in the public administration system, should be an example of true hard work, political responsibility, and civic patriotism. There is no doubt that this is exactly what our Party members will be in the future,” the President believes.

Concluding his speech, the Head of State drew attention to the fact that the year of the 30th anniversary of our Independence begins with the election of deputies of the Majilis and maslikhats, which has a symbolic meaning.

“I am sure that the upcoming elections will strengthen the unity and prosperity of society. We will create all conditions for this campaign to be transparent, fair and legal. I, as the Head of State, will closely monitor this,” Kassym-Jomart Tokayev concluded. 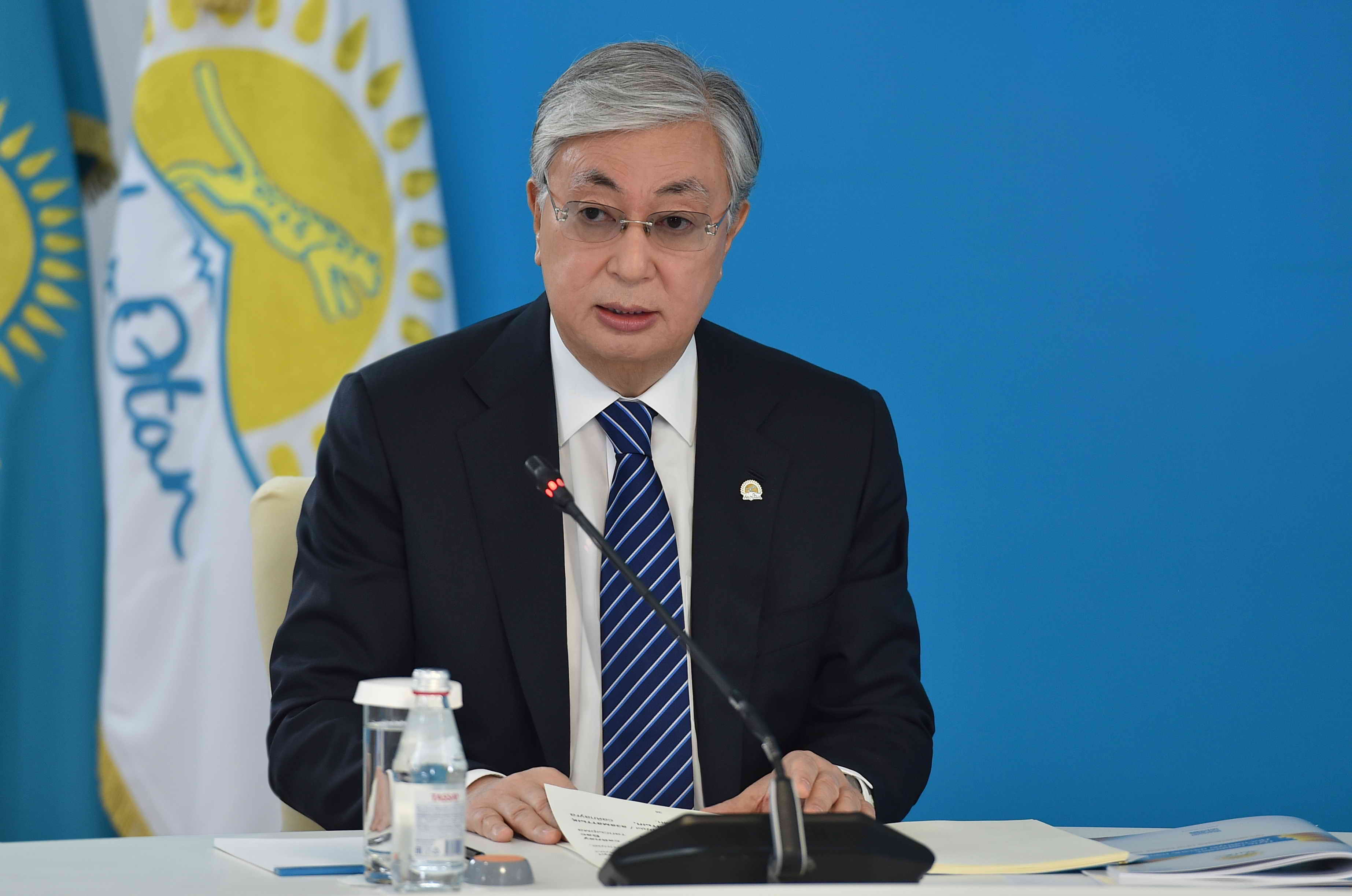 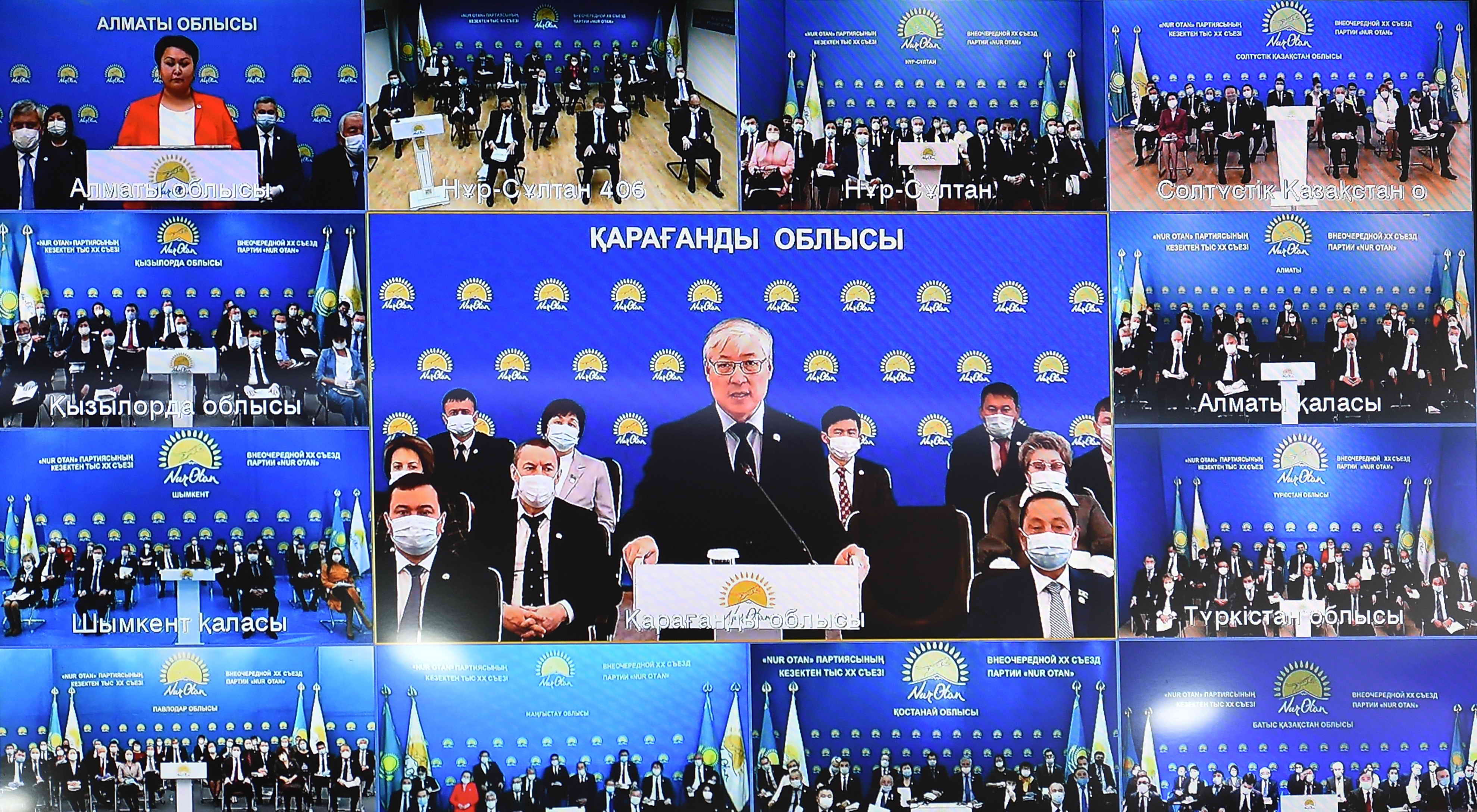 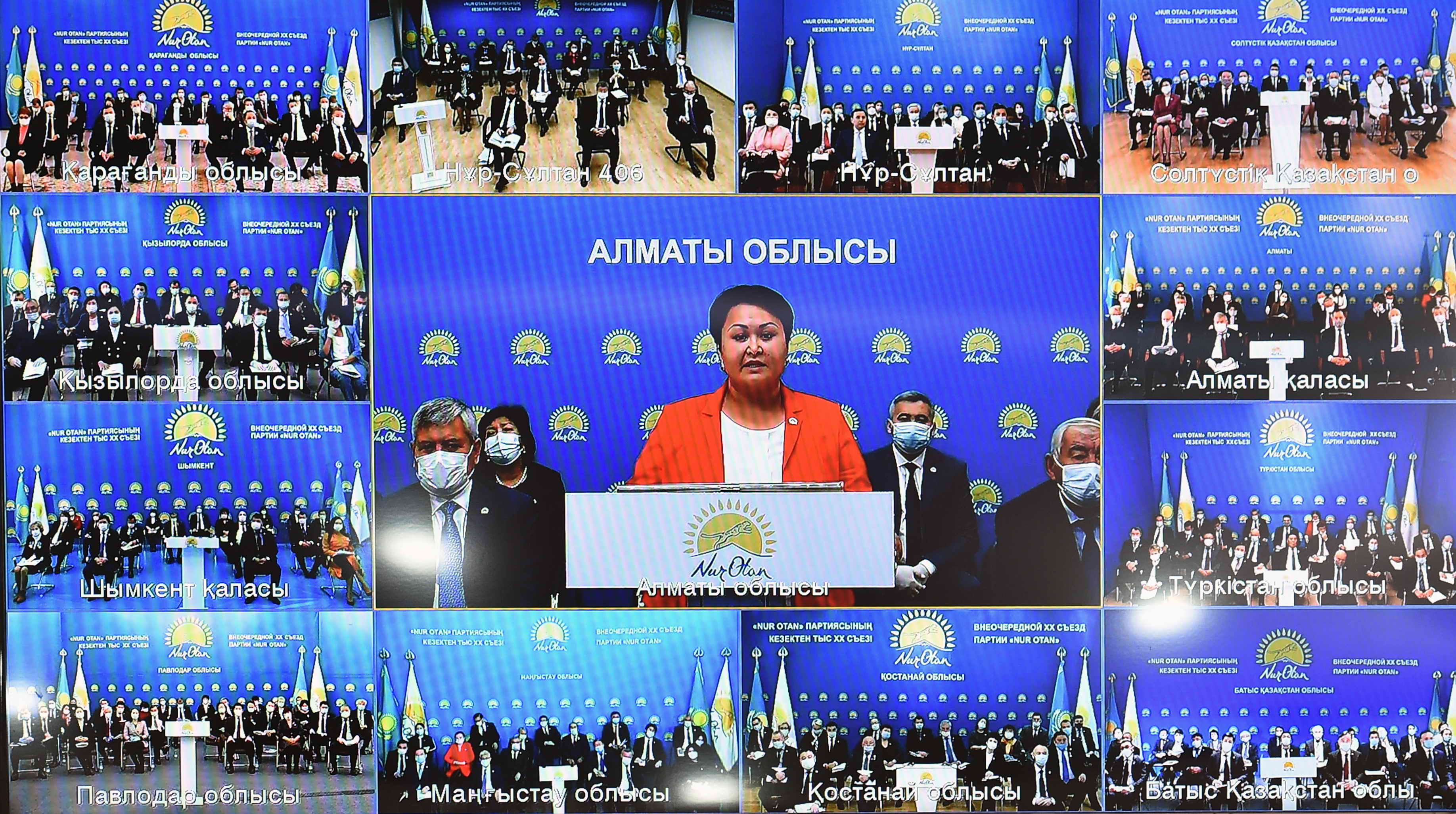 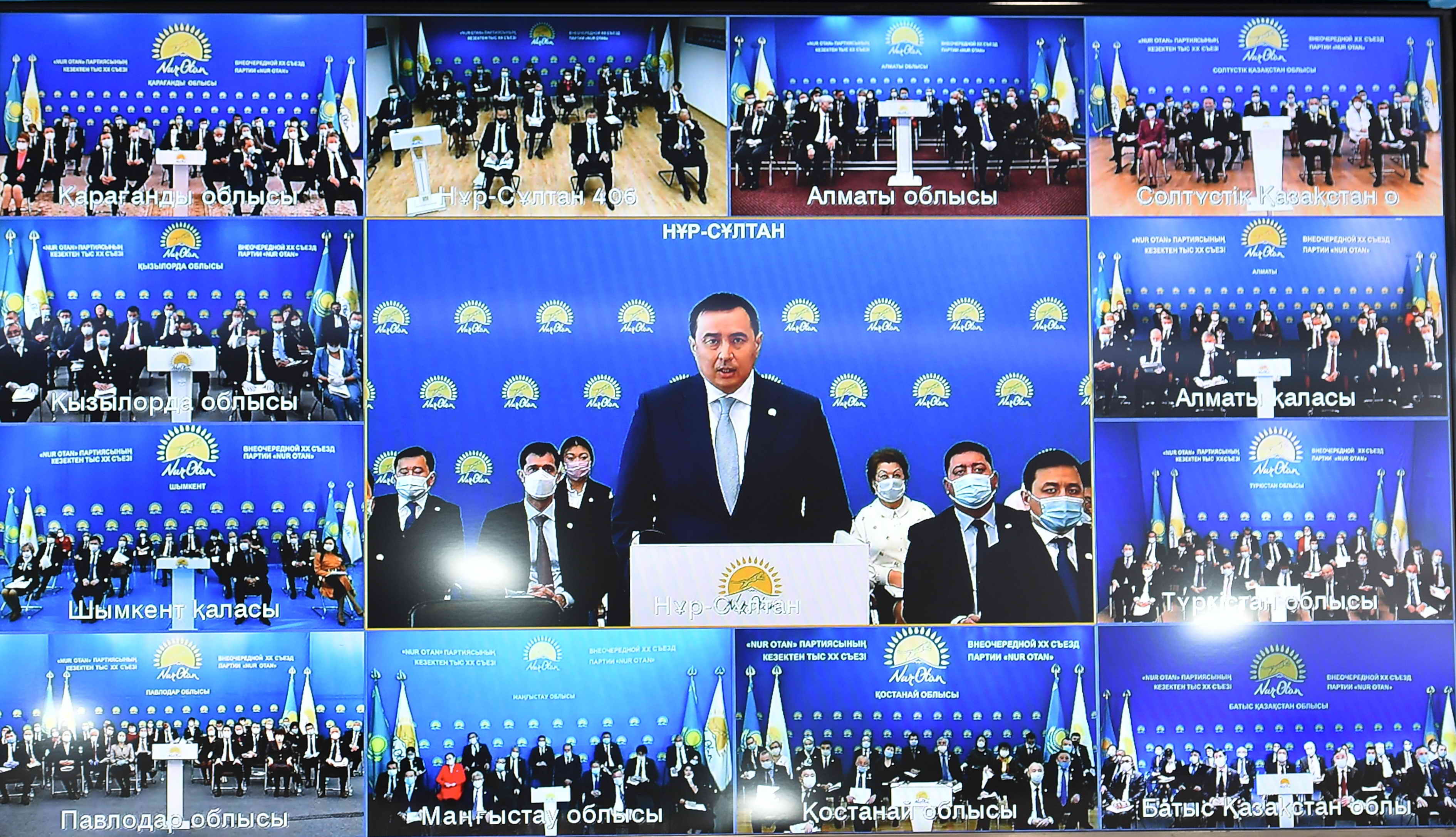 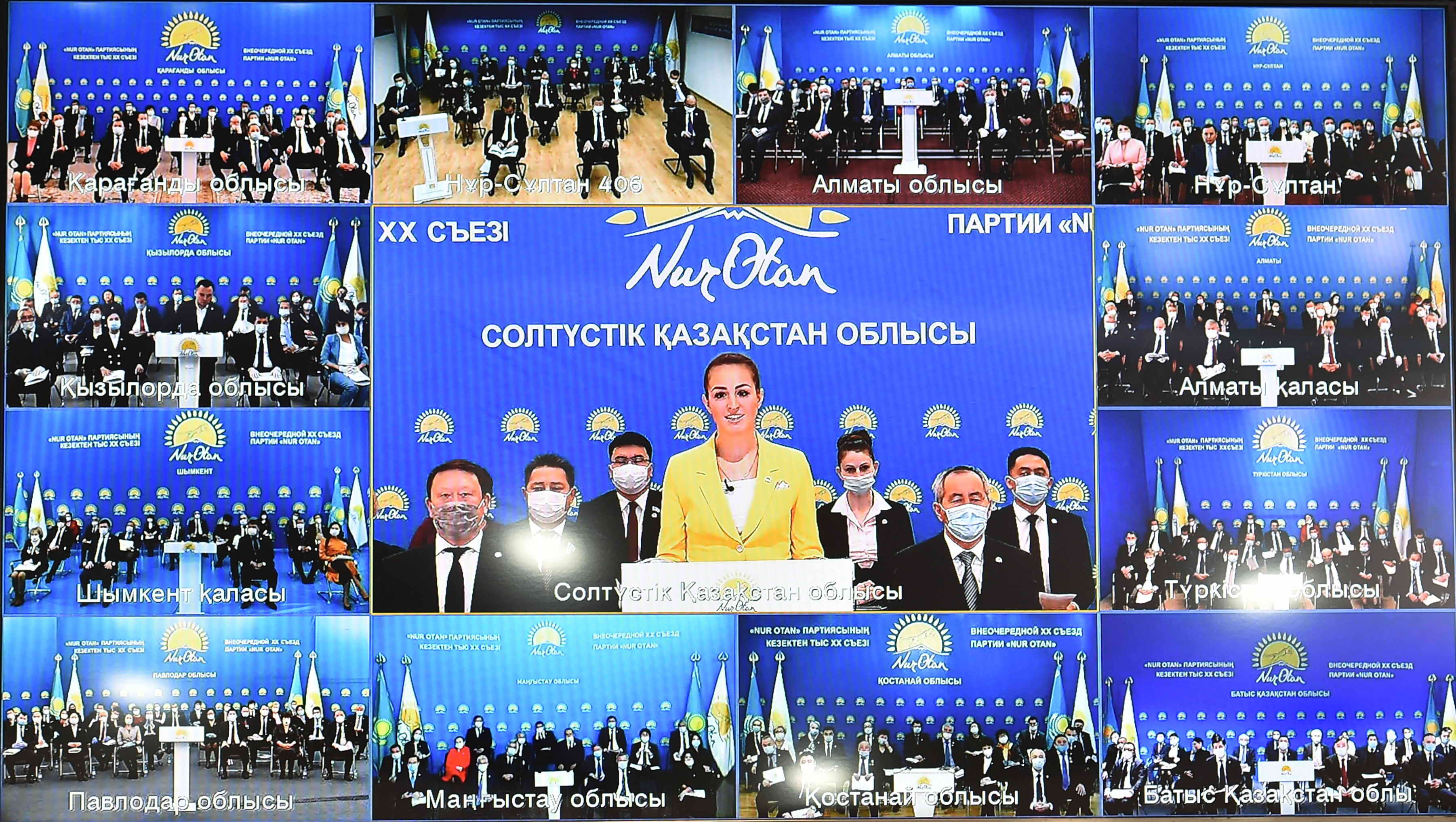